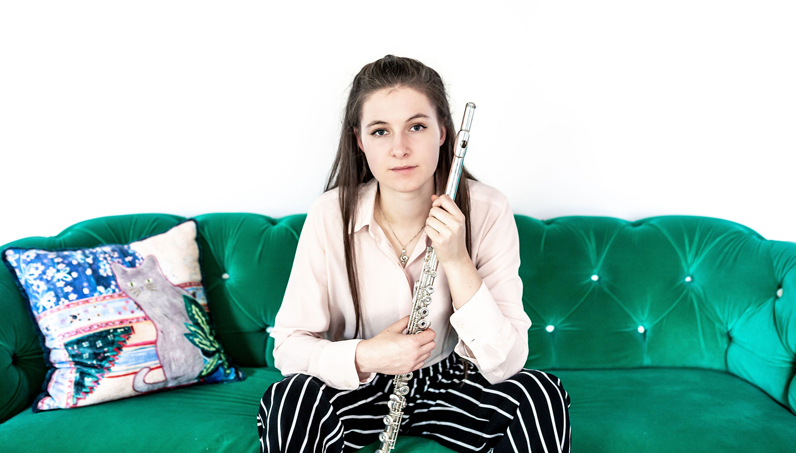 Daisy is proud to be supported by the Molly Townson Bursary in 2021.

Daisy made her flute concerto debut in 2014 at the John Lewis concert in Ardingly Chapel and has since performed concertos with the London Mozart Players, Bexhill Sinfonietta, Hastings Sinfonia and the Sussex Concert Orchestra.

Daisy is a dedicated solo performer. She performed her first evening solo recital with Anne Marshall at the Opus Theatre, Hastings in November 2018. She has performed as a soloist in Venice and at prestigious venues in the United Kingdom including at Birmingham Symphony Hall, Glyndebourne, St John’s Smith Square and the Duke’s Hall, London. She has also performed throughout East Sussex, at local churches, at the Hastings White Rock and Opus Theatres and Eastbourne’s Winter Garden. In 2020, Daisy, together with Oliver Poole, world premiered ‘The Birds’, composed by Polo Piatti, a piece which was anonymously commissioned and dedicated to her.

Daisy’s orchestral experience stretches far and wide. She is currently principal flute of the National Youth Orchestra of Great Britain (NYO) and has been a member since 2018. She has performed at numerous concert halls all over the United Kingdom; including at the BBC Proms, Barbican, Royal Festival Hall, Bridgewater Hall, Warwick Arts Centre, Liverpool Philharmonic Concert Hall and Birmingham’s Symphony Hall; under the batons of Sir Mark Elder, Jaime Martin, Kwame Ryan, Kirill Karabitz, Mark Wigglesworth, Carlos Miguel Prieto and Sir George Benjamin. In 2019, Daisy performed with NYO as part of Young Euro Classic at the Konzerthaus, Berlin.

Daisy is currently principal flute of the University of London Symphony Orchestra (ULSO), Hastings Sinfonia and has played guest principal for the Sussex Concert Orchestra. Daisy has played principal flute in JRAM’s Classical Orchestra, Sinfonia and Symphony Orchestra and for Opera South East as well as playing for Battle Light Opera. In 2014, Daisy played under the baton of Edward Gardner with the Barbican Young Orchestra and prior to joining NYO she played principal flute as a member of the National Children’s Orchestra (2012-2017) where she was also a Director of Music Scholar and a Leverhulme Scholar.  In 2018, Daisy was appointed principal flute for the International Composers Festival Orchestra, conducted by John Andrews and is thrilled to have been appointed Principal Flute as well as Junior Ambassador for the 2022 Festival.

An avid composer, Daisy won the Royal Opera House London Fanfare competition in 2016 with her composition ‘Funfair in Sea’ which was recorded by the Royal Opera House Orchestra, conducted by Antonio Pappano and played throughout the 2016/2017 season in Covent Garden, letting people know when to take their seats.

Daisy is keen to raise awareness of Classical music, and the importance of team-work and a sense of community through music-making. Daisy has been involved in various outreach projects with JRAM, NYO Inspire and the Hastings Sinfonia. For NYO Inspire, Daisy has created and led workshops for other young musicians and has organised fundraising concerts. In 2020, Daisy was awarded the Fitter Stronger ‘Recharge Award’ for Music outreach.

Daisy has a strong interest in yoga and meditation and also takes part in regular Alexander technique classes. She recently spoke on the Young Persons Panel for the Alexander in Education Conference.